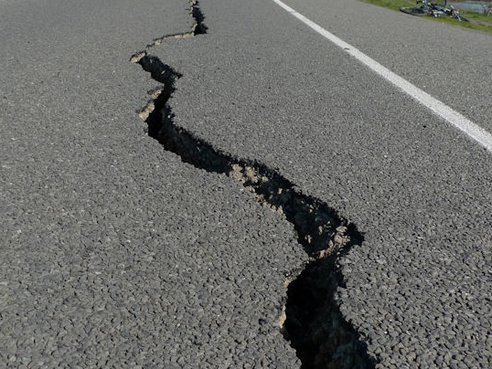 Tremble, Earth! You’re in the Lord’s presence! In the presence of Jacob’s God.
He turned the rock into a pool of cool water, turned flint into fresh spring water.

Nothing strikes fear in human beings more than times when the heavens and the earth act in ways they shouldn’t.

Take earthquakes, for example. Being from Iowa, I’m scared spit-less of an earthquake. Just recently, I was in Los Angeles, and noticed a sign on the wall of my hotel room. “In case of emergency or earthquake…”

Yikes. Suddenly, I realized that I wasn’t in Kansas anymore, Toto!

Yet for those who live in California, most take earthquakes in stride. One friend from LA once told me, “Marty, earthquakes don’t scare me. It’s those terrorizing tornadoes you guys have back in the Midwest that scare me silly!”

I kinda laughed. Here in Iowa, tornadoes are common, but earthquakes are not. I guess it’s actually the fear of the unknown that really frightens all of us.

So when Psalm 114 talks about the earth trembling in the presence of the Lord, I get a bit jittery. Quite honestly, the idea of the earth moving under my feet doesn’t bring much comfort to my soul.

But here’s another thing that makes me jittery. Christians who go around saying with certainty that the end of the world is imminent because of the big increase in earthquakes! Now don’t get me wrong. I do believe with certainty that we are definitely 2,000 years closer to the end than when Jesus first told His disciples about His imminent return, but quite honestly, this idea that we can pinpoint the year, month and hour based on the latest earthquake does shake my confidence in many Christians who apparently didn’t read what Jesus actually said! Let’s review. In Matthew 24 (verses 3-14), Jesus gives us His overview of things to come. Let’s look at it using The Message Bible…

Later as He (Jesus) was sitting on Mount Olives, His disciples approached and asked Him, “Tell us, when are these things going to happen? What will be the sign of your coming, that the time’s up?”  Jesus said, “Watch out for doomsday deceivers. Many leaders are going to show up with forged identities, claiming, ‘I am Christ, the Messiah.’ They will deceive a lot of people. When reports come in of wars and rumored wars, keep your head and don’t panic. This is routine history; this is no sign of the end. Nation will fight nation and ruler fight ruler, over and over. Famines and earthquakes will occur in various places. This is nothing compared to what is coming. They are going to throw you to the wolves and kill you, everyone hating you because you carry my name. And then, going from bad to worse, it will be dog-eat-dog, everyone at each other’s throat, everyone hating each other. In the confusion, lying preachers will come forward and deceive a lot of people. For many others, the overwhelming spread of evil will do them in—nothing left of their love but a mound of ashes. Staying with it—that’s what God requires. Stay with it to the end. You won’t be sorry, and you’ll be saved. All during this time, the good news—the Message of the Kingdom—will be preached all over the world, a witness staked out in every country. And then the end will come.”

Seems to me that this earthquake thing is not a sign of end times, but simply a sign of the increasing turmoil our earth has been in since the days of Adam and Eve. As I see it, when the earth trembles or the tsunamis hit, when disasters come and people’s lives are destroyed, it’s not necessarily a sign of Jesus’ coming, but just another obvious reminder that we don’t live in heaven!

In truth, when we Christians go around saying this calamity or that tragedy is ‘a sign of Jesus’ return’, we’re actually telling folks out there that it doesn’t matter to God how many people die, ‘cause this is all about His Son’s second coming! Yikes. What kind of good news is that?

Don’t we see what damage we’re doing to God’s good name when we cluck our tongues over the latest disaster that hits our world and say, “Tsk, tsk, too bad…just another sign that the world is evil and God is coming to judge it!”

Come on, folks. Let’s get our head out of our beloved behinds and call ‘em as they really are! This world was created by God. Loved by God. The Savior I know loves every last person that lives on it. As I see it, there’s no vengeance in His heart. There’s so secret agenda to kill and maim as many people as He can before His Son returns!

So let’s stop the ‘end-time’ madness and do what Jesus asked us to do between His first coming and His second. Let’s go love ‘the hell’ out of folks during these turbulent times instead of scaring them to hell!

Let’s talk up the ‘good news’ of the Gospel while the earth is shaking and quaking. Let’s go love and rescue folks who are being terrorized by Satan’s roars, giving them love and care when the next disaster hits. In truth, the fact that Jesus is returning soon should make us Christians more sympathetic and empathetic toward our neighbors, not judgmental!

Enough preaching for today. I better be careful or the earth just might move under my feet!

My prayer: Without a doubt, Father God, this world we live on is not at peace. It rumbles under my feet. The waves pound over the shores. Tornadoes and hurricanes rip wildly at our lives. But through it all, I refuse to blame You for their existence. I believe with my whole heart, You desire to give mercy and hope when such disasters hit. Empower me to war against these worldly disasters, extending mercy and grace when such calamities occur. For Your name’s sake. Amen.

My questions to ponder: What will ‘holding on’ and ‘staying with it’ look like for those of us who live in these ever-increasing turbulent times? How have I misread the ‘signs’ of Christ’s return? What do I need to do to turn off my judgmental spirit towards the world and become an agent of peace and mercy when disasters and calamities hit my fellow man?

So what is God speaking to you today as you ponder the Psalms?

Over a 50-week period, you and I will take a deeper look at The Psalms: God’s Songbook of Prayers. In order to keep all the blog sessions organized, we suggest you bookmark our Contemplating the Psalms home pagefor ease of use. Keep in mind that one of the best ways to explore the on-going applications of this blog series is to walk alongside a biblically-based, Christ-centered spiritual director who is familiar with how to make material like this part of your overall spiritual formation in God. Many of our directors in our Contemplative Activist network are available to companion you in your journey with Jesus. Click here for more info.