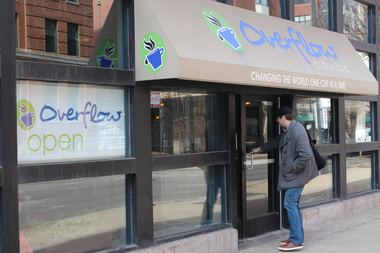 SOUTH LOOP, CHICAGO, IL — Brew it, and they will come.

Overflow Coffee Bar, which started out as the lone independent coffee shop in the then-burgeoning South Loop, celebrates its fifth anniversary this month. Working from the motto that it’s “changing the world one cup at a time,” it’s finding that it just might be changing the neighborhood as well.

Taking a “think globally, act locally” concept that might have been more stereotypical of a coffee shop in Wicker Park or Rogers Park, Amanda and Brandon Neely instead located in the South Loop at 1550 S. State St.

“I fell in love with this neighborhood,” said Amanda, a University of Chicago alumna who found herself traveling what she now calls the “college corridor” from Hyde Park to the Illinois Institute of Technology in Bronzeville to Columbia College and the DePaul campus and others in the Loop and South Loop.

In 2007, the South Loop seemed on the verge of exploding with business opportunities. “But there weren’t a lot of businesses following suit, and there was no independent coffee shop in this area,” she added. “We saw the potential that we could anchor ourselves here and further that development.”

They eventually found space in the Daystar Center, a like-minded collective committed to “building community through culture and the arts in the South Loop,” for which Amanda now serves as director. 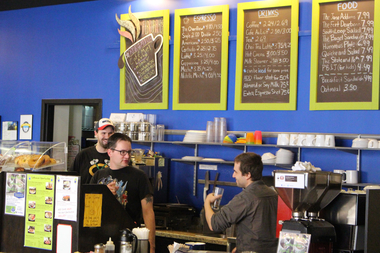 “This location was kind of serendipitous,” Brandon said, in that the disparate array of tenants actually wound up functioning like “roommates,” lending support to one another.

The Neelys sought to pitch what they called “ethical economics” in each cup of coffee.

Overflow gets its coffee from a Bucktown roaster who deals directly with growers.

“We get it the next day after it’s roasted and use it within two weeks,” Amanda said. Where they say the average Starbucks or even a so-called Fair Trade coffee shop uses a handful of middlemen in the process, for the Neelys the coffee goes directly from farmer to roaster to shop to customer. The farmer gets a better deal, and the customer gets a better cup of coffee.

“We didn’t focus on the profits or the money side,” Brandon said. “We just wanted to make a difference.”

Amanda said she and her husband are “activists first and business people second.

“We need to grow the business side of ourselves,” she said. “It’s not just about making a quick buck or promoting our cause. It’s about learning and growing together.”

That learning and growing came in ways not even they imagined at first, although consistent with their prevailing method of learning things for themselves and then passing it on to others.

After years of planning and then one last snag in the form of the “Snowpocalypse” blizzard, Overflow opened on March 18, 2011.

“The day after St. Patrick’s Day, the best day to open a coffee shop,” Amanda said. “It worked out well for us.”

Almost five years later, the couple has proved their staying power, even as South Loop growth has been a process of fits and starts.

“We thought we were really on the cusp of something huge. But it hasn’t happened yet,” Amanda said. The South Loop has seen “a little bit of growth, then some places still close.”

Even though population has grown, residents still tend to be tied to their cars, she added, not producing the foot traffic that helps small businesses survive in other neighborhoods.

Yet with the upcoming addition of several new glitzy high-rises, as well as the DePaul arena at McCormick Place, “maybe we’re finally on the cusp,” Amanda said. “There’s a lot of potential. It’s just how are we going to maximize it?”

The answer, they decided, was to create a South Loop chamber of commerce — in marked contrast with the existing South Loop Chamber of Commerce, which actually serves Bridgeport with offices near 35th and Halsted streets. Similarly, neighborhood groups like the Greater South Loop Association and the Prairie District Neighborhood Alliance have tended to serve residents, not merchants.

So the couple launched what they’re calling the South Loop Alliance in September, with more than 40 members signed up so far. Just as Amanda learned the coffee trade with what they term a “mentorship” at the Common Cup in Rogers Park, they’ve looked to groups like the Andersonville Chamber of Commerce on how to organize merchants within the neighborhood.

“We didn’t think we’d actually be starting a chamber of commerce at all,” Brandon said.

“We don’t want just the businesses to win,” she said. “We want the whole neighborhood to win.”

Key to that will be the South Loop defining itself, much as Andersonville is already defined as a historically Swedish area with a concentration of businesses going back to the ’20s.

The South Loop is more of a blank slate, with what Amanda called “a hodgepodge of different things,” which creates difficulties but also presents opportunities in trying to construct an image that encourages visitors from the nearby Museum Campus and Soldier Field, as well as welcoming the students in the area and, of course, the residents.

Amanda pointed to how, with so much new construction in the neighborhood, it’s actually a city leader in Leadership in Energy and Environmental Design buildings.

“What if we became the most environmentally friendly neighborhood?” Amanda said. “Would people buy into that vision? Probably. Maybe.”

The goal, however, is to make it “sustainable,” she added, “so this neighborhood thrives for generations to come.”

Again, the process is to take what they’ve learned and pass it on, just as they’ve taught others about the benefits of being an L3C, a low-profit, limited-liability company, one step up the capitalist ladder from a nonprofit. Overflow was among the first firms in the state to become a licensed L3C, and since then the Neelys have told others how to go about it and what’s to be gained.

That collective approach even extends to the shop’s fifth anniversary, as the Neelys are planning a five-year party April 2.

They’re actually charging for it, $25 in advance and $35 at the door, but that will include the Neelys and others speaking on the challenges of running a responsible business, along with free chair massages and other treats. They’re shooting for a turnout of 250 people, all of them prepared to think globally and act locally where the South Loop is concerned.