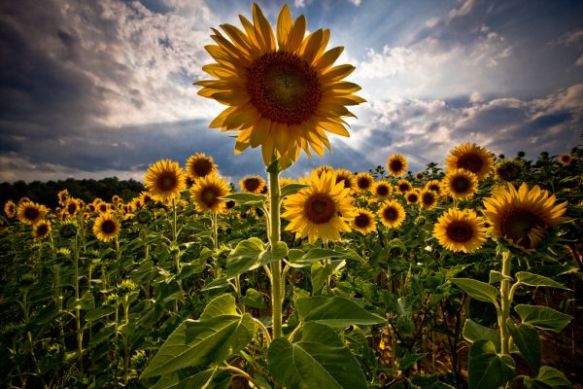 “The One who comes from above is head and shoulders over other messengers from God. The earthborn is earthbound and speaks earth language; the heavenborn is in a league of His own. He sets out the evidence of what He saw and heard in heaven. No one wants to deal with these facts. But anyone who examines this evidence will come to stake his life on this: that God Himself is the truth. The One that God sent speaks God’s words. And don’t think He rations out the Spirit in bits and pieces. The Father loves the Son extravagantly. He turned everything over to Him so He could give it away—a lavish distribution of gifts. That is why whoever accepts and trusts the Son gets in on everything, life complete and forever! And that is also why the person who avoids and distrusts the Son is in the dark and doesn’t see life. All he experiences of God is darkness, and an angry darkness at that.”

John the Baptist concludes his powerful Christ-centered speech to his followers by pointing out the obvious. No one who considers themselves a laborer of God will ever get anywhere close in stature to Jesus of Nazareth. As John puts it, “The One who comes from above is head and shoulders over other messengers from God.”

As I see it, the real conflict in pastoral ministry today is that this role of being ‘a messenger from God’ (or a mouthpiece for Jesus, set apart for His Kingdom purposes) can so easily evolve, over time, into a job where we assume that God is with us, regardless of where we go or what we say. This is especially true if we, as ministry overseers, find ourselves being fortunate enough to find a degree of success or public acceptance. In worst case scenarios, servants of God become public celebrities where folks begin to hang on every word we write or speak. It’s at this point when the true test of humility sets in.

John the Baptist, in the few years just prior to 30 AD, had every eye in Israel turned toward him. He had become, by any sense of the word, a celebrity for God. He had the public’s attention and, for the most part, their loving affection. Both the secular and religious leaders of his day were fully aware of all he was saying and doing out there in the wilderness. If the marketing machine of corporate America were available to him back then, I’m certain that John the Baptist would be writing and selling books that would be top-sellers in both the religious and secular markets of the day.

His crowd sizes were massive. And without a doubt, John knew inwardly that he was enjoying God’s favor. He was, without question, a messenger from God. But unlike so many Christian leaders today, John knew very well that his powerful ministry was limited to pre-set boundaries that God had determined for him. He knew internally that this public favor he was experiencing was limited and would end the moment God’s Messiah stepped foot on the stage.

John Wimber, the founding father of the Vineyard Churches, told an amazing story in the early days of the Vineyard that defined for us who John was in his own eyes. In the early to mid-1980’s, John Wimber was experiencing an amazing blessing from God. The Holy Spirit had given John a very clear message for the American church and by 1985, when I first met John; he was traveling extensively, serving as a messenger of God. Yet despite the high degree of popularity that John was experiencing in those days, he would always remind us that the Lord was very clear with him in the months prior to his walking into this very public ministry he was now enjoying. One night in a hotel room in Detroit, the Lord came to John and said, “John, I’ve seen your ministry, and now I’d like to show you Mine.”

As John told this story he would quickly add how the tone of the Lord’s voice was not condemning, but very purposeful. The truth was that John’s ministry, prior to this night in Detroit, was very focused on John trying to accomplish a lot of good things for Jesus. A good attempt, driven by good human effort, for a very good cause. But limited. Very limited.

Just think how much more might get done today in America, if more of us American church ‘leaders’ could be as equally humble in preferring Jesus’ ministry over ours?

My prayer: While theologically speaking, we pastors know that Jesus is head and shoulders above us and our ministries, we so often fail to act as though there is a ministry in our midst that is much more important than ours. May I, Holy Spirit, be more willing, like John the Baptist and John Wimber, to defer to You and Your ministry while reducing mine. For Your name’s sake. Amen.

So what is God speaking to you today as we follow Jesus the Nazarene, the Leader of the Church?

Between now and the end of 2015, we will be sharing with you a blog series we first developed in 2013. We call it Follow The Leader: Re-defining Successful Leadership from the Gospel of John. In order to keep all 46 blog sessions organized, we suggest you bookmark our Follow The Leader home page for ease of use. ENJOY!

Click here to go onto the next blog in the series.